Challenges
Improvements
When a roll-type small cutting plotter was used, media setting was difficult and thus preparation was time-consuming. We also wanted to increase the cutting accuracy.
CFL-605RT has higher accuracy and easier setting than the roll-type counterpart, making the downtime very short. Since the cutting speed is also fast, time loss and media loss are significantly reduced. The sense of “quick creation and show” becomes effective in up-selling during proposal phase. 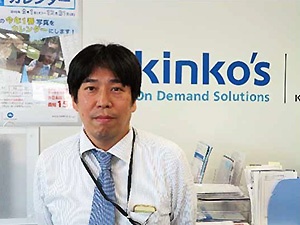 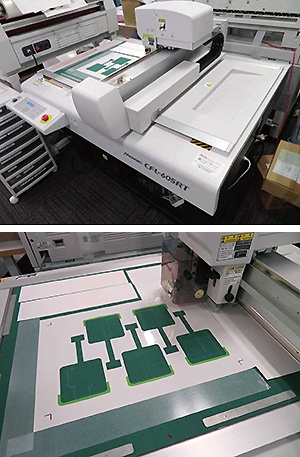 CFL-605RT has been actively used since opening of the shop

Kinko's Kanazawa Oyama Jinja Mae shop opened in November 2015 as the first Kinko's appearing on the Sea of Japan side. The shop is named after a shrine called “Oyama Jinja” located in the center of Katamachi downtown near Kanazawa Station. The shrine is familiar to the local citizens of Kanazawa City. So, the shop aims to be beloved by the locals.
Shunji Kondo, shop owner, was assigned to this shop on its open and has been with the shop since then.

The cutting plotter “CFL-605RT” was also introduced when the shop opened, so that it can propose various products to customers in Kanazawa.
The CFL-605RT can perform various kinds of processing by itself, such as cutting, half-cutting, dotted line cutting and creasing, although its body is compact and space-saving. The shop uses it with a printer to create seals, stickers, POP items, small-size display fixtures, and so on.

Compared with roll conveying cutting plotters, the CFL-605RT has higher accuracy and yet only requires rough positioning of media when you set it. And this makes the downtime very short. Responding to short-term delivery and small-lot production is a strong point of Kinko's, which is a good match with the machine.
Kondo says: “A roll-type small cutting plotter we used previously required 5 to 10 minutes for setting. Compared with that, in this machine, you just put media on it to complete the setting. Because of this overwhelmingly short preparation time, you can easily use this machine once you are taught how to use it, and all staff members of the shop use it. In terms of standardization, it's a very useful product.” He emphasizes its easy operation as above.

Cutting speed is also adjustable. In the case of A4 size media, up to approximately 50 sheets can be handled per hour for square or other standard cutting. Average number of orders of seal the shop receives is 50 to 200 pieces, and there was even a case where up to 2,400 pieces of A4 size were completed through 48-hour continuous operation. In the past, there was a time when even a 3mm correction seal was manually cut and many pieces were lost, but with the CFL-605RT that eliminates these problems, the loss of time and media is significantly reduced.

Responding to customer requests with accuracy and speed 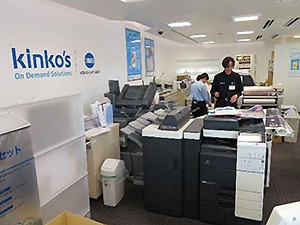 Various jobs are brought into Kinko's

At Kinko's shops, basically, many “orders are received (or shipped) on the day following the receipt of order”. Since many Kinko's shops are open 24 hours a day, some customer brings in data at midnight, fetches finished goods first thing in the morning, and goes to work. Other visitor, while eating lunch, waits for processing to be over and use the product in the afternoon.

“We have lots of rush jobs. There are many customers who think ‘Kinko's would make it somehow’ and come to us, and since they often demand jobs to be done faster, the CFL-605RT is appreciated for its speed. And these jobs are high value-added jobs,” says Kondo.

Half-cut products used as seal, label, and sticker account for 80 percent, followed by cut POP products, triangle POP goods, and leaflet boxes, many of which are assembled and used as stereoscopic products.
The most common type of business among clients is food services, and there are also inquiries from tourism-related facilities such as hotels and souvenir shops.

Bring ideas into shape for proposals 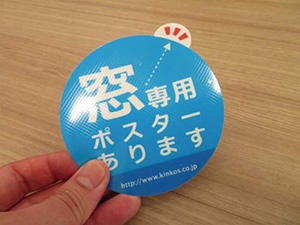 Round or odd shape cutting can be handled easily

The cutting plotter works not just in creating products ordered, but in up-selling POP goods, stickers, and fixtures during proposal phase when the shop provides consultation for store layout and decoration or when receives an order of leaflet.

On-site cutting is available over the counter and customers can check the image. When you visit your client and provide consultation, they can pick up the cut sample on the following day. This sense of “quick creation and show” becomes a powerful advantage to drive sales.

Jobs that the CFL-605RT handles are also coming from outside this shop. Kinko's has shops throughout the country and is characterized by its service provided across multiple areas. For instance, an order is placed in Tokyo and delivery is made in Kanazawa.
Its cutting service using the CFL-605RT is requested from the Shinjuku, Osaki, or Ikebukuro shop in Tokyo, or even from distant Sapporo. After the machine is installed to the Kanazawa Oyama Jinja Mae shop, Kinko's has installed it more to other newly opened shops. “Kanazawa is located midway among the three cities: Tokyo, Nagoya, and Osaka. We can make a delivery to any shop in these areas in one day, so we are appreciated,” says Kondo, analyzing the good location of this shop.
Since orders requested by shops in other areas are coming on a regular basis, the machine constantly operates on almost all business days, handling 30 to 40 jobs per month. 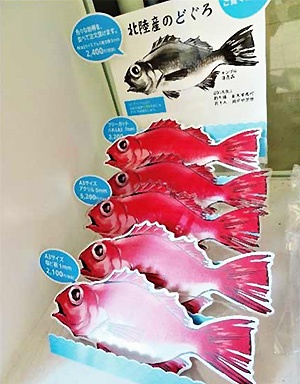 Even ‘Nodoguro’ fish can be expressed by cutting its shape

In Kanazawa, “retailers and eateries are not much decorated” due to its local color, and square or standard POP items are more used. A proposal on complex shapes like cloud, which makes full use of the cutting operation, is “worthwhile in Kanazawa”.

“Three years have passed since this shop opened, and I feel the way to use Kinko's become widespread, though only gradually. Conversely, customers sometimes offer us a proposal on the usage that our staff wouldn't even know. We want to respond to such customers in the future,” says Kondo.

Taking advantage of a volume of information obtained from 60 Kinko's shops, the company has an ability to give shape to the needs of customers who “want to make it somehow”. Using various devices including the CFL-605RT in the future, it aims to make its shops more helpful. 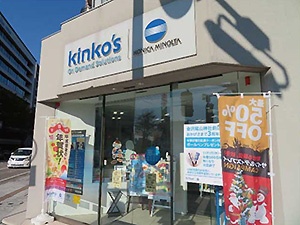 Kinko's is a leading supplier of on-demand print service. It operates 60 shops nationwide and responds in the most quick and appropriate way to wide-ranging needs, including creation of a single business card, exhibition posters, and signboards, as well as printing and bookbinding.