Challenges
Improvements
Photo printing and larger signage are required at a current signage market.
The first user of grand format JV5 printer. The wide printing width is the big appealing point for clients.

The first user who introduced JV5 with the print width of 3,250mm which is one of their selling point. 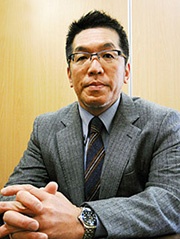 Industry: The indoor and outdoor signage

【Moved into the digital printing as the demand of the client changed】
Their office is located in a regidential area. The first floor with the high ceiling height is used for the work space, and a spacious loft on the same floor is used for office. 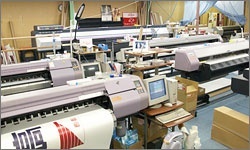 In the big work space, seven Mimaki's printers including JV3 and JV4 are installed. The young staffs work smart where the printers are in its full operation. It looks like SOHO at a glance.We asked Mr. Shinichi Nakazawa (CEO) about the particulars of the establishment of the company, and their business.

"I founded this company with several comrades in April, 2002. We started our business from the advertising agency. We outsourced the creation part, but after we introduced JV2, we came to take care of the creation. A creation company with which we were doing business had JV2, and that was how we came to know Mimaki. We thought it was productive to use the same printer that the customer had, so there was no hesitation to introduce Mimaki's printer."

The company mainly take care of the creation of the store ornamentes such as flag and banner. The reason why they decided to handle the digital printing was the demands of the clients changed a lot, they said. In recent years, the store ornaments are getting larger, and making great use of letters as well as pictures. At the same time, the low cost and quick turnaround are required.

"Printing pictures on the flag and banner became popular, which is difficult for the silk screen printing. Also, the case, printing on the several materials, is increasing, so it was natural to move into the digital printing."

【We use Mimaki's printer only. The reason is found in the software】
The second printer that they introduced was JV4, and used both JV4 and JV2 for a while. The president Mr. Nakazawa said, "When we purchased JV2, JV4 was launched. You may think it was better to buy JV4, but its print speed was too fast for us at that time." As their business expands, however, they became to place the more importance on the performance of the mahcine. Then, they introduced the solvent inkjet printer JV3. Since their foundation, they have been using Mimaki's products consistently.

"The reason why continue to use Mimaki's printers is that the user-friendly RIP software (Raster Link Pro) as well as the machine's performance. The pre-view window allows us to set the printing condition smoothly and intuitively. Even the novice can manipulate the software easily. This is one of the reason why we can't switch to other companies' machines."

【Printing on tarpaulin and PVC with the high speed printing and the high image quality】
In the summer of 2007, the company introduced the grand format solvent inkjet printer, JV5-320S, which accomplished the widest print width of 3,250mm in Japan. 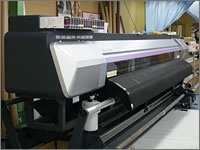 "The large format printer taking over the high image quality and the high speed printing of the JV5 series, was really attractive for us. This is because we dealt with the store ornaments which were getting larger year by year, and we thought that the wider print width was going to be a strong selling point."

In addition to the wide print width, the number of compatible media was also the key to introduce.

"It was the big decisive factor that tarpaulin and PVC is printable. Recently, tarpaulin is often used for the banner, so the wide printer was required. However, if we used machine only for the heavy media such as tarpaulin, the attraction of the printer erodes. JV5-320S is defferent. JV5-320S has a small take-up device which adjust the tension while take-up as a standard feature so that the light and narrow width media such as PVC can be used without the roll shaft. This is the printer which accomplished multi-use. JV5-320S is the new product which meets the demand of the users including the cost performance."

JV5-320S can load two types of inks, HS ink and ES3ink. The hard solvent ink ruins the media, but there are no worries with HS ink which achieves high scratch resistance, fast print speed, and high density printing. In addition, JV5 ensures high image quality regardless of the sizes or the types of the media which allows for responding all kinds of the demands of the users.