Challenges
Improvements
Our main job is production of construction signboards and safety signs, of which delivery time is as short as 2-3 days. In spite of such short delivery time, because of over 24h of required drying time of solvent ink printing, we had kept some customers waited.
The UV printer UCJV300-130 requires no ink drying time. It allows to attach the printed sheet on the construction signboard right after printing, which improved the work efficiency. Having the cutting function, it supports small lot production and contributes to cost reduction when producing products like stickers used at construction sites. 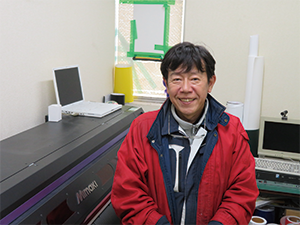 Mr. Kenji Shimono in charge of production at Showa 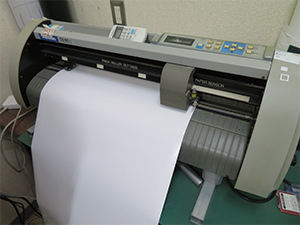 Showa Co., Ltd. sells and rents safety tools, and produces and installs signboards for real estates and shops. Their safety tools refer to equipment indispensable for construction and civil engineering sites such as cones, fences, and barricades. Some of such equipment needed at field sites are “construction signboards” and “safety signs” which display information such as the construction place, schedule, and the constructor name. The company uses the inkjet printer (IJP) “UCJV300-130” for printing the information display par. Signboards they print are installed across the Kagoshima prefecture including remote islands.

The company has long used Mimaki Engineering's cutting plotter “CG-60ST” to produce magnets to be attached to construction signboards and blackboards. In the process of production, they attach the cut sheet on the signboard or blackboard. They cut letters, remove the area around them, then attach the sheet to the board, which takes several people. This work was a heavy burden, and took manpower and time. 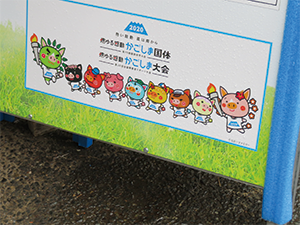 Demand for construction signboards with illustrations such as local mascots increased.

The company has also operated a solvent-based inkjet printer, “JV33-130”. It was introduced in response to increasing requests from customers for adding illustrations to the makeshift signboards and signs for construction sites. Compared to the job with the cutting plotter, the printing-cutting-applying work was simplified significantly with the use of Inkjet printer.

Mr. Kenji Shimono in charge of production looks back, “We receive more and more orders for signboards requiring sheet-attaching work. This generated an enormous workload and we were close to the limit with use of only the cutting plotter.” Using IJP, they only need to attach a color-printed media on a board. The work that once required several people can now be handled by one person alone. The IJP reduced the workload to about one-tenth.

Items printed with UV ink have excellent abrasion resistance, and hardly get scratched. When using other inks, they had concerns about the abrasion resistance.
Plus, they felt the necessity of weather resistance. Signboards are displayed outdoors for 1 month at the shortest, and over 2 years at the longest. As an ink to endure such period, UV is suitable.

The impression they had immediately after starting operation was “It can be attached right after printing”. "The ink dries so fast that there is no problem even if someone claws it right after printing". Less occurrence of scratches and cracks improved the work efficiency. Conversely when using solvent, they needed to leave it for at least 1 hour (1 day is recommended by the manufacturer).

Also, because the media are less damaged, the stiffness remains, making it easy to attach and remove them for installation. Among the usual using media of PVC, transparent film and  retroreflective sheet, etc., there was nothing that could not be printed. UV ink exhibits no bleeding even with blended colors and realizes coloration with bright clarity. 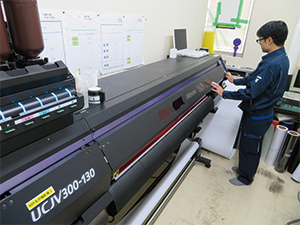 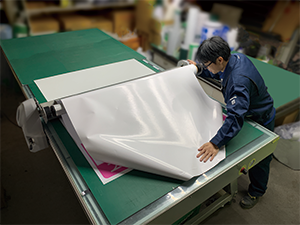 They stick sheets to the boards on a working table like this. When using the UV printer, the printed sheets are stiff and easy to handle.

Having shifted from the solvent printer, they felt a difference of texture, but it was rather a favorable impression. It produces brilliant neutral colors, and prints illustrations and photos more beautifully. In particular, it makes the red color stand out better, producing a brighter tint than before.

The printer could be operated from the very first day after installation. It was easy to operate, and “made us realize evolution of the software compared to the conventional model.” reviews Mr. Shimono.

Delivery time of the construction signboards produced by the company is 2-3 days in average after order. Many of them are quickly completed jobs. In the event of a disaster such as typhoon, flood, or mudslide, they can undertake time-critical jobs such as detour signboards. When using solvent ink, the printings need to be left for drying for at least 24 hours, which sometimes forced them to keep customers waiting for half a day or so. Since introduction of the UV printer shortened the drying time, “We would never make you wait.” is now one of the sales talks of the company's sales staff. 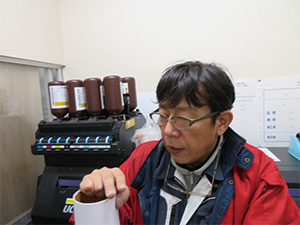 Mr. Shimono says he “realized evolution of the software.” 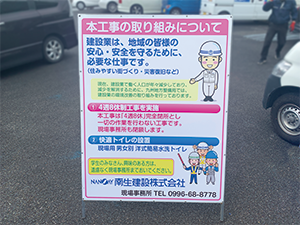 Construction signboards are mostly delivered in 2-3 days after order.

The company also enjoys the benefit of the cutting function. At construction sites, there are cases where it is mandatory to prepare and attach to the helmets “certificate for the completion of safety instruction to new recruit” stickers which prove that the new recruit received an explanation on rules and dangerous points. The company uses “UCJV300-130” to print and cut such stickers.
This sticker needs to be printed with the name of construction company and place, and produced in small lots of several dozen. Because using a printer requiring plates is too costly, printing with Inkjet printer is the best suited solution for this demand.

Also, when producing view boards (blackboards) with the place and date used for taking a recording photograph of the construction site, they print a sheet with the name of the construction place and company, and attach it to the blackboard. They used to do it by cutting and writing letters manually, but now they only need to print a sheet and attach it to create a more beautiful board quickly. Besides, there are cases where they cut and paste letters and logos.

A cut sheet is attached to create a “view board”.

The printer is currently operated at almost full capacity for 6-7 hours, and 30-50m per day. Although the main line of business is construction signboard, jobs of signboards for commercial use are increasing gradually as well. The company aims to receive more orders in this field in the future.